How Bonobos Use Sex to Settle Conflict

“Sex is… perfectly natural. It’s something that’s pleasurable. It’s enjoyable and it enhances a relationship. So why don’t we learn as much as we can about it and become comfortable with ourselves as sexual human beings because we are all sexual?” ~ Sue Johanson

By now you have heard the adage that we are 98 or 99% similar to the great apes we share genetic ancestry with, but what you may not know is that somewhere along the way we modeled our behavior and society on the wrong type of monkeys – chimpanzees instead of bonobos. 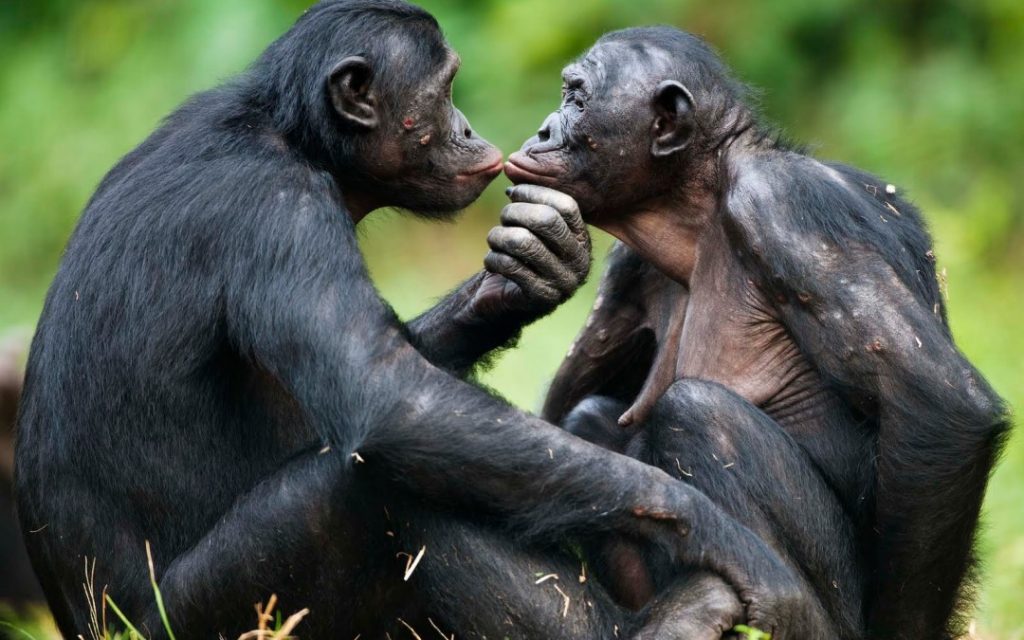 Resulting in a strained and repressed incorporation of our sexuality within a patriarchal and violent cultural context. Chimpanzees use violence and dominance as imposed by males to maintain order, hierarchy, and control; just like us humans.

Bonobo’s on the other hand are more unrestricted and peaceful, but conflicts still arise. Instead of using violence, they speak to each other in a language of physical love and sexual expression.

Zanna Clay and Frans de Waal of Emory University are studying bonobo behavior and how they use sex to diffuse conflicts. Here is how they describe their observations:

“Bonobos are unusual among mammals in that they habitually use sexual contacts for purely social purposes, beyond their pure biological function.

Observing bonobos, it becomes clear that sex can play many roles in bonobo society–especially in resolving social tension–and so I became interested in its non-reproductive role, focusing especially on how sexual contacts are used as an alternative means to resolve social conflicts.

Rather than allowing a fight to escalate, it is interesting to compare, even to our own species, how bonobos employ sexual contacts to diffuse tension and restore peace.”

That’s probably why they have earned the reputation as a “sexy” ape. In bonobo society sexual activity plays a huge role in many creative practices.

For example: sexual contacts happen often, in nearly all partner combinations and in countless positions.

Imagine for a second the world of the bonobo, a world where sexually aware and powerful female matriarchs are in charge of their troops.

Bonobos are non-monogamous, polyamorous, bisexual, and generally what humans would aspire to in a model of enlightened, non-jealousy provoking sexual relationships.

Imagine for a second how amazing it would be to live in this world instead of the violent chimp-like society we have modeled for ourselves.

Here are some ways in which our world could benefit from being more like that of the bonobos:

1. Political Disputes would be fun to watch because world leaders like Obama and Putin would face off against each other while swinging from tree limbs and ‘penis fencing’ with each other.

4. Sex would lose its shameful stigma in a world where it becomes a medium of communication instead of dominance.

5. Men would be less angry and repressed in a world where sex is not rationed and controlled within a religiously repressed patriarchy.

Until our world changes for the better and becomes more like that of the bonobos, it becomes important for all members of our society to look deeper to nature and the animal kingdom to find models for love, sex, and relationships that are not based upon the teachings of the angry narcissists we worship as gods.

I’m pretty sure that bonobos have no need for gods or religions because they live a life where love and sex is open and honest.

I also believe the bonobos are typically too exhausted and satisfied to worry too much about intellectual problems since they get laid pretty regularly.

Sanjay Sabnani is a CEO, author, and father of three daughters. His favorite pastime is to answer questions on Quora